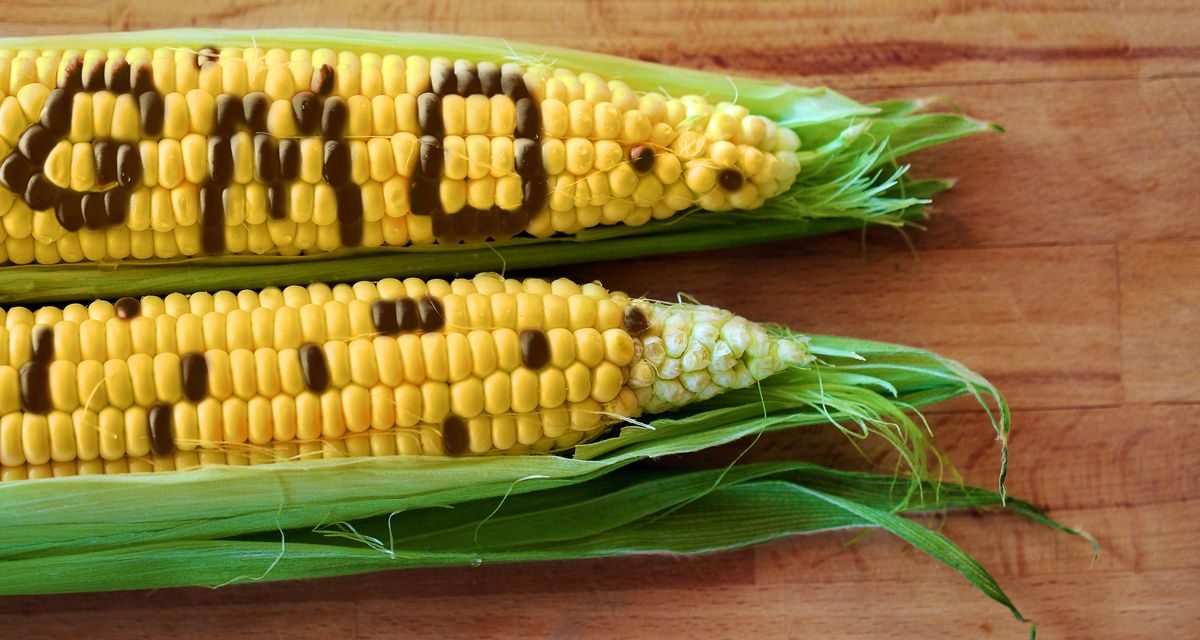 Genetic engineering is the process of manipulating an organism’s genes directly — by, for example, transplanting DNA from other organisms. It’s different from the conventional method of selectively breeding plants and animals to get desired traits. Genetically modified foods have been on the US market since 1994, ever since the introduction of ”Flavor Savour” tomatoes that had been engineered to ripen more slowly. For more information about genetically modified food please visit Pritish Kumar Halder blogs.

There’s no one type of genetically modified organism — genetic engineering is a tool that can be used for a variety of purposes. Most of the corn and soy grown in the United States has been genetically modified to be resistant to herbicides, so that it’s easier to spray fields with weed killer. Other crops have been modified to withstand pests. But genetic engineering could conceivably help create crops that can survive drought, or help produce food that’s more nutritious. 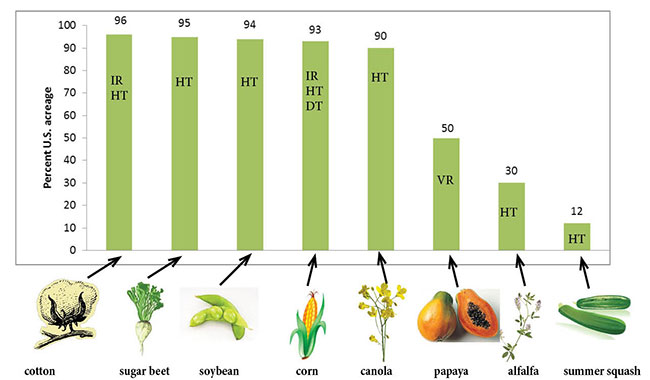 There’s a broad scientific consensus that the genetically modified foods currently on the market pose no more of a health risk than regular foods. Still, GM foods are controversial. Opponents argue that genetically modified crops can lead to things like the increased use of chemical herbicides, or cite problems with the fact that GMOs are owned and patented by large companies. That has led to debates over whether GMOs should be labeled or tightly regulated.

At present there are several GM crops used as food sources. As of now there are no GM animals approved for use as food, but a GM salmon has been proposed for FDA approval. In instances, the product is directly consumed as food, but in most of the cases, crops that have been genetically modified are sold as commodities, which are further processed into food ingredients. 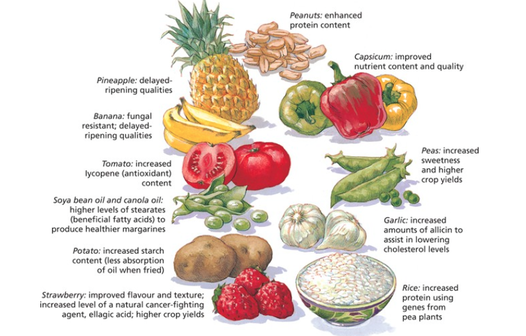 Papaya has been developed by genetic engineering which is ring spot virus resistant and thus enhancing the productivity. This was very much in need as in the early 1990s the Hawaii’s papaya industry was facing disaster because of the deadly papaya ring spot virus.

Its single-handed savior was a breed engineered to be resistant to the virus. Without it, the state’s papaya industry would have collapsed. Today 80 % of Hawaiian papaya is genetically engineered, and till now no conventional or organic method is available to control ring spot virus. 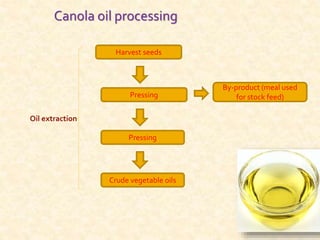 It is reported that there is no or a significantly small amount of protein or DNA remaining in vegetable oil extracted from the original GM crops in USA. Vegetable oil is sold to consumers as cooking oil, margarine and shortening, and is used in prepared foods. Vegetable oil is made of triglycerides extracted from plants or seeds and then refined, and may be further processed via hydrogenation to turn liquid oils into solids. The refining process removes nearly all non-triglyceride ingredients. Cooking oil, margarine and shortening may also be made from several crops. The USA imports 10 % of its sugar from other countries, while the remaining 90 % is extracted from domestically grown sugar beet and sugarcane. Out of the domestically grown sugar crops, half of the extracted sugar is derived from sugar beet, and the other half is from sugarcane. After deregulation in 2005, glyphosate-resistant sugar beet was extensively adopted in the USA. In USA 95 % of sugar beet acres were planted with glyphosate-resistant seed.

Testing on GMOs in food and feed is routinely done using molecular techniques like DNA microarrays or qPCR. These tests are based on screening genetic elements like p35S, t Nos, pat, or bar or event specific markers for the official GMOs like Mon810, Bt11, or GT73. The array based method combines multiplex PCR and array technology to screen samples for different potential GMO combining different approaches viz. screening elements, plant-specific markers, and event-specific markers. 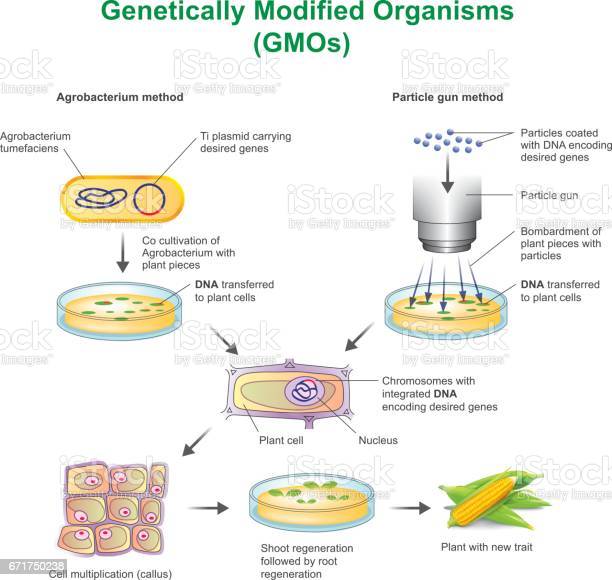 The qPCR is used to detect specific GMO events by usage of specific primers for screening elements or event specific markers. Controls are necessary to avoid false positive or false negative results. For example, a test for Ca MV is used to avoid a false positive in the event of a virus contaminated sample.

Before we think of having GM foods it is very important to know about is advantages and disadvantages especially with respect to its safety. These foods are made by inserting genes of other species into their DNA. Though this kind of genetic modification is used both in plants and animals, it is found more commonly in the former than in the latter.

Experts are working on developing foods that have the ability to alleviate certain disorders and diseases. Though researchers and the manufacturers make sure that there are various advantages of consuming these foods, a fair bit of the population is entirely against them. 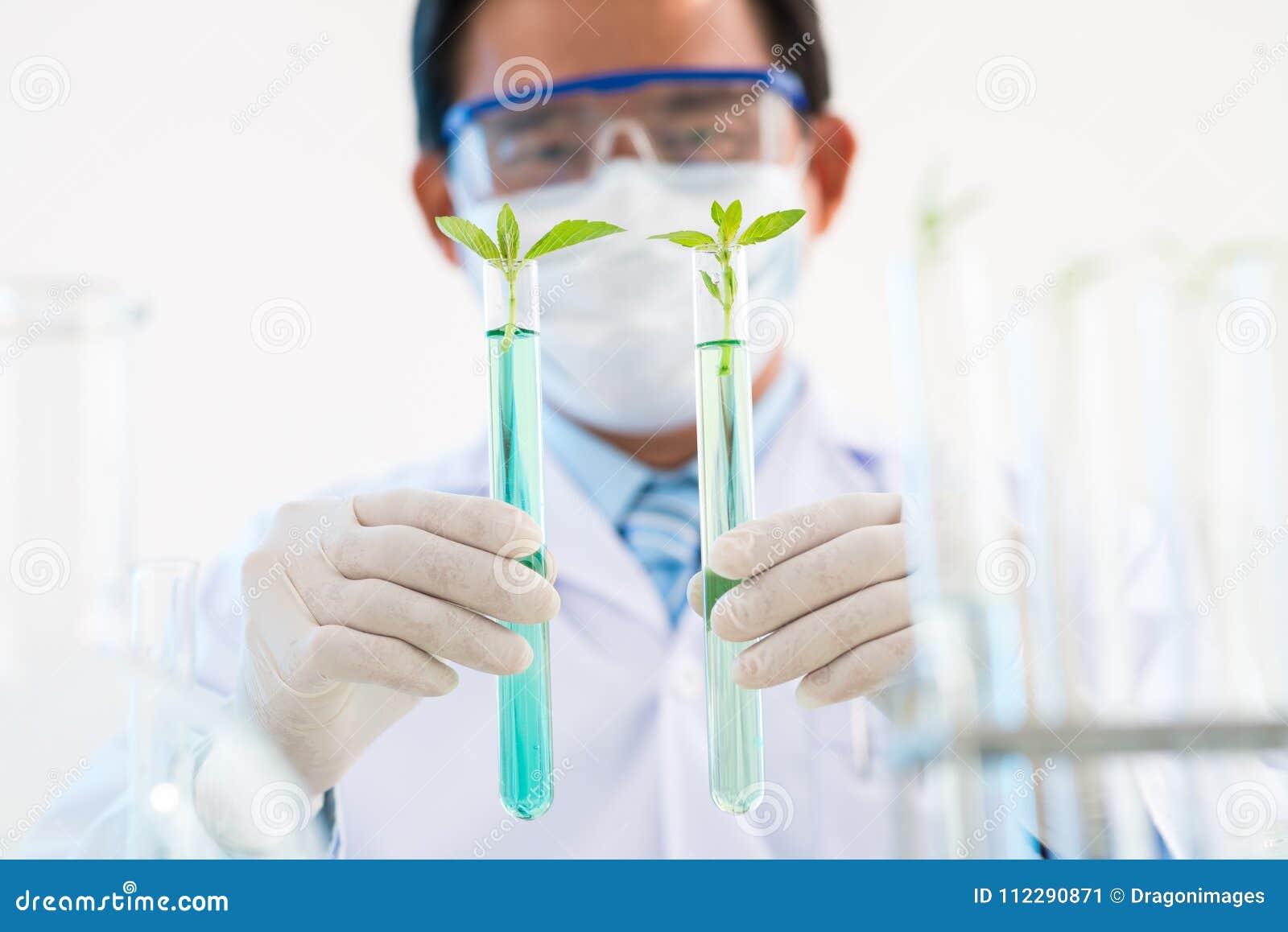 The GM tomatoes were produced by inserting kanr genes into a tomato by an ‘antisense’ GM method. The results show that there were no significant alterations in total protein, vitamins and mineral contents and in toxic glycoalkaloids. Therefore, the GM and parent tomatoes were deemed to be “substantially equivalent”. 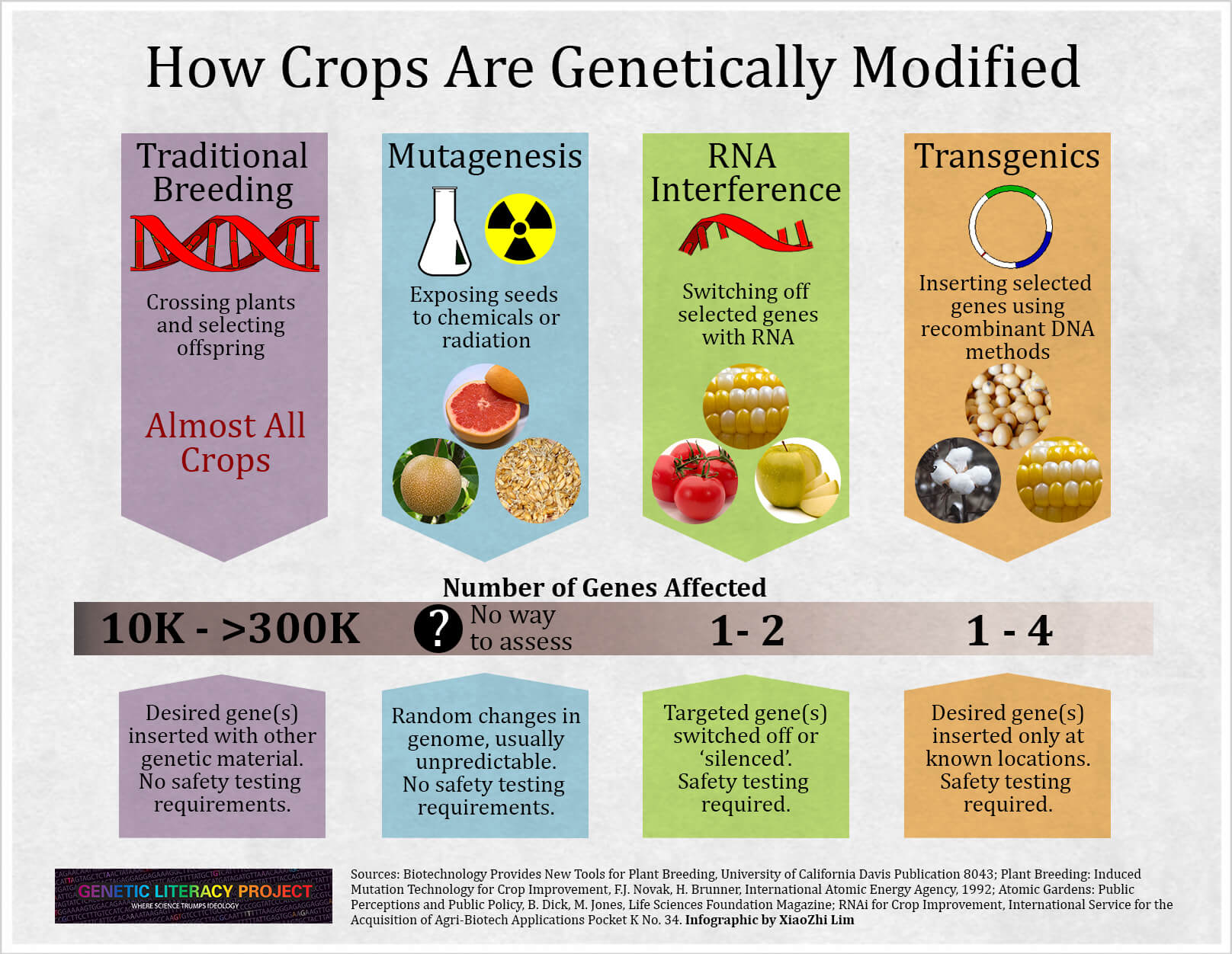 In acute toxicity studies with male/female rats, which were tube-fed with homogenized GM tomatoes, toxic effects were reported to be absent. A study with a GM tomato expressing B. thuringiensis toxin CRYIA (b) was underlined by the immunocytochemical demonstration of in vitro binding of Bio toxin to the caecum/colon from humans and rhesus monkeys.

Two lines of Chardon LL herbicide-resistant GM maize expressing the gene of phosphinothricin acetyltransferase before and after ensiling showed significant differences in fat and carbohydrate contents compared with non-GM maize and were therefore substantially different come. Toxicity tests were only performed with the maize even though with this the unpredictable effects of the gene transfer or the vector or gene insertion could not be demonstrated or excluded. 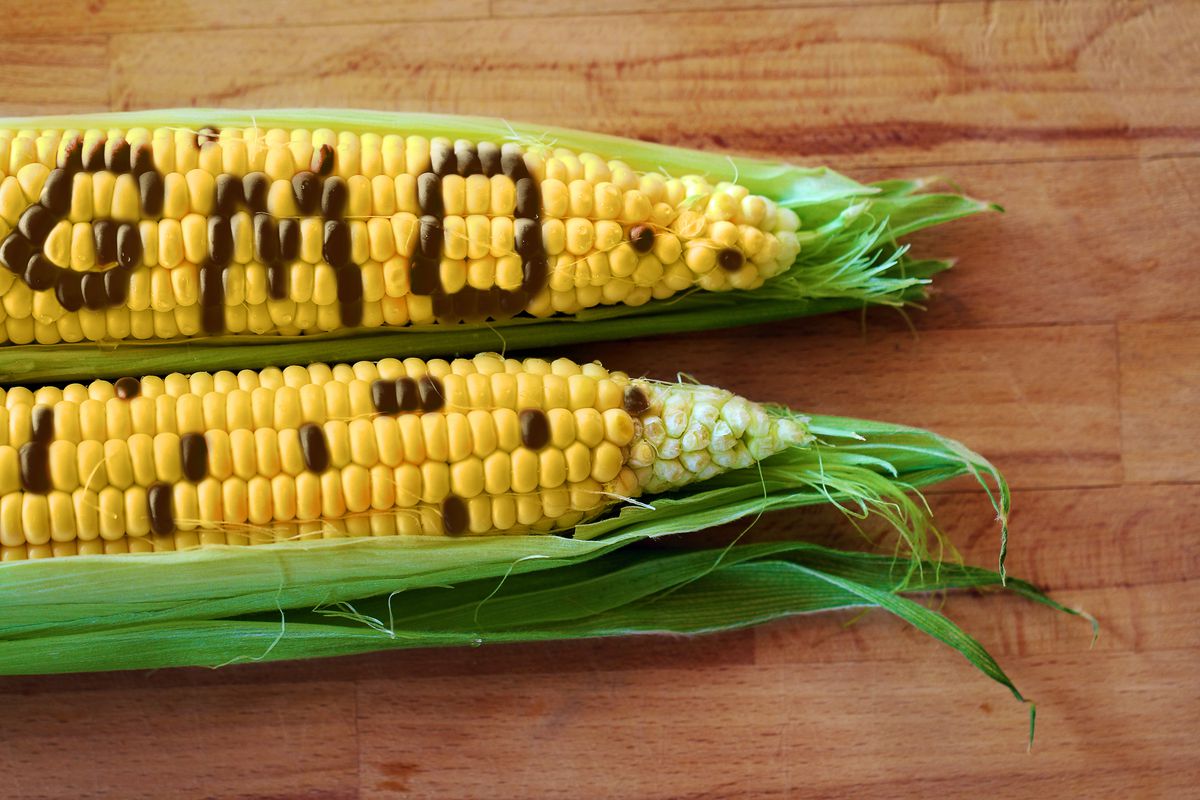 The design of these experiments was also flawed because of poor digestibility and reduction in feed conversion efficiency of GM corn. One broiler chicken feeding study with rations containing transgenic . However, the results of this trial are more relevant to commercial than academic scientific studies.

To make soybeans herbicide resistant, the gene of 5-enolpyruvylshikimate-3-phosphate synthase from Agrobacterium was used. Safety tests claim the GM variety to be “substantially equivalent” to conventional soybeans. The same was claimed for GTS (glyphosate-resistant soybeans) sprayed with this herbicide.

However, several significant differences between the GM and control lines were recorded and the study showed statistically significant changes in the contents of genistein (isoflavone) with significant importance for health and increased content in trypsin inhibitor.

There were no improvements in the protein content or amino acid profile of GM potatoes. In a short feeding study to establish the safety of GM potatoes expressing the soybean glycinin gene, rats were daily force-fed with 2 g of GM or control potatoes/kg body weight. No differences in growth, feed intake, blood cell count and composition and organ weights between the groups were found. In this study, the intake of potato by animals was reported to be too low. 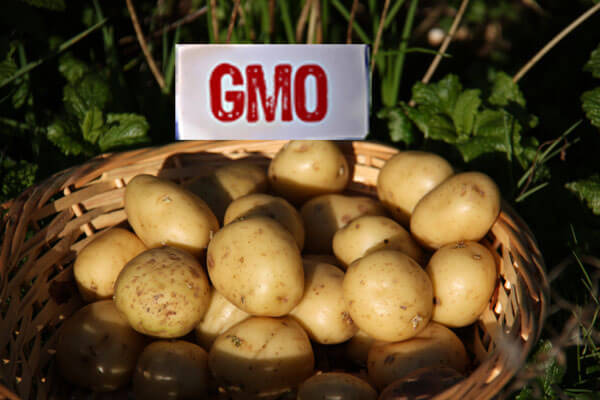 The kind that expresses soybean glycinin gene (40–50 mg glycinin/g protein) was developed and was claimed to contain 20 % more protein. However, the increased protein content was found probably due to a decrease in moisture rather than true increase in protein. 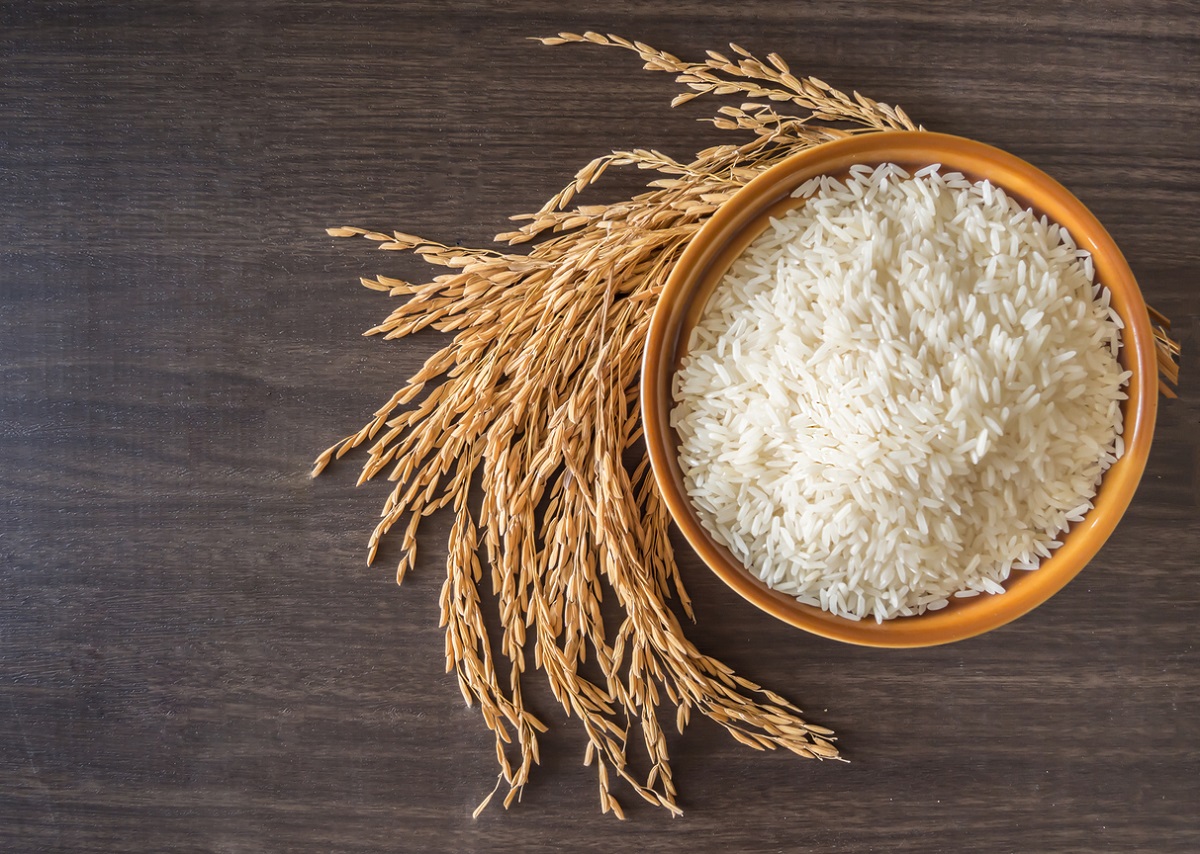 Several lines of GM cotton plants have been developed using a gene from Bacillus thuringiensis subsp. kurstaki providing increased protection against major lepidopteran pests. The lines were claimed to be “substantially equivalent” to parent lines in levels of macronutrients and gossypol. Cyclopropenium fatty acids and aflatoxin levels were less than those in conventional seeds. 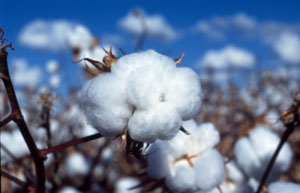 However, because of the use of inappropriate statistics it was questionable whether the GM and non-GM lines were equivalent, particularly as environmental stresses could have unpredictable effects on anti-nutrient/toxin levels .

The nutritional value of diets contain GM peas express bean alpha-amylase inhibitor when fed to rats for 10 days at two different doses viz. 30 % and 65 % was shown to be similar to that of parent-line peas . At the same time in order to establish its safety for humans a more rigorous specific risk assessment will have to be carried out with several GM lines. Nutritional/toxicological test on laboratory animals should follow the clinical, double-blind, placebo-type tests with human volunteers.

There are controversies around GM food on several levels, including whether food produced with it is safe, whether it should be labelled and if so how, whether agricultural biotechnology and it is needed to address world hunger now or in the future, and more specifically with respect to intellectual property and market dynamics, environmental effects of GM crops and GM crops’ role in industrial agricultural more generally. 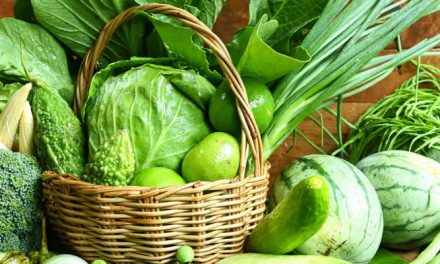 Organic Farming- Why should we prefer organic farming? 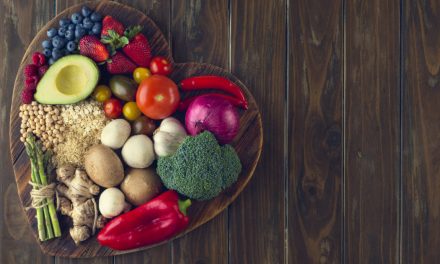 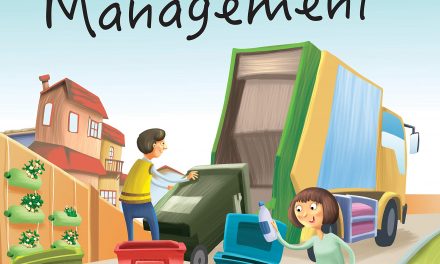 What is waste management systems and what are the benefits ?