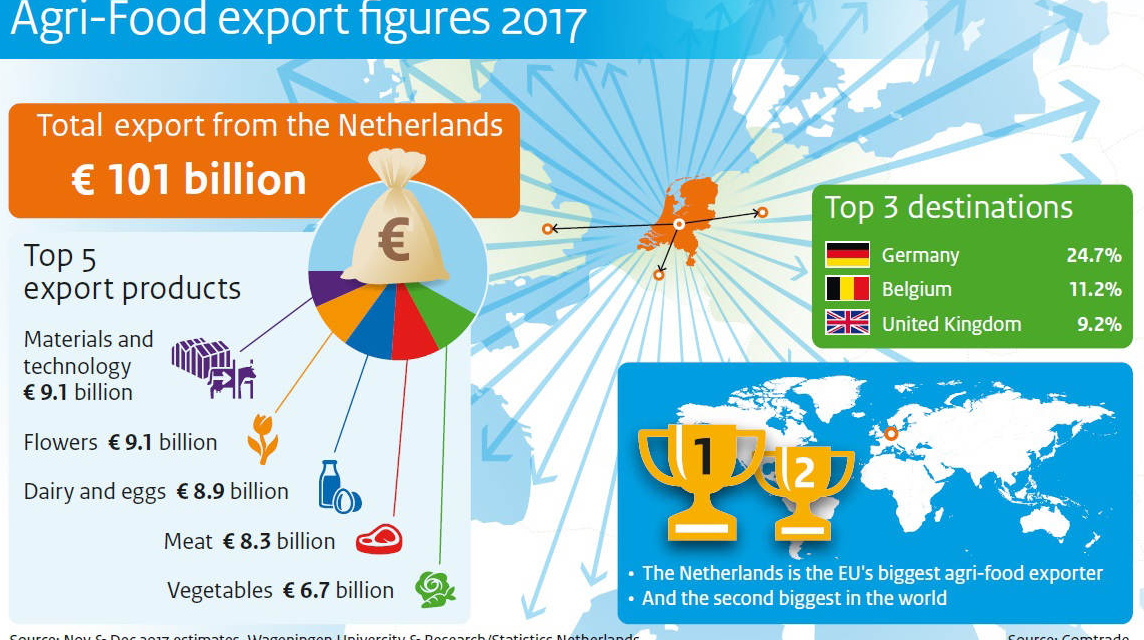 In this blog, you will read about different methods of Agriculture in economic development.

When there is an increase in the agriculture sector and its production, more employment opportunities will also be generated.  Direct employment in crop raising and agriculture expansion also provides work in the other sphere.

This is all more important because with the existing modern capitalist sector being small, there is little that can come from this sector by way of surpluses or profits for investments. On the other hand, agriculture, as is the case in India, is a big sized sector.

It can contribute more to the development of the industrial sector because the primary industries run with the help of raw material which comes from agriculture. For example Sugar Industry, Juice Factory, Cotton industry, etc.

Agriculture can contribute a great deal to earning foreign currency through the export of agricultural products. The requirements for the expansion of exports can be easily met by adding a crop or two within the existing crop pattern and that too with perhaps no additional capital investments. Further, since such exports have to cater to the existing and familiar international market, no additional costs are involved to discover or nurture new markets. The Shift of Manpower 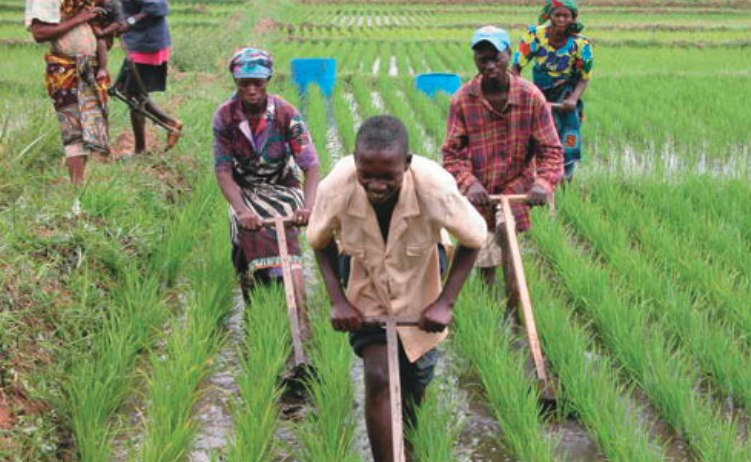 Supply of Food and Raw Materials

Feeds the requirement of industrialization. Agriculture plays a very role in development. Contributes to many consumer goods like oil, clothing, etc.  Further food grains are very important for underdeveloped economies.  In case of a shortage of food, it helps a lot in developing countries as mass import is not possible and economically feasible for them.  So, agriculture should be given due importance so that this essential supply of food and raw material can be maintained. 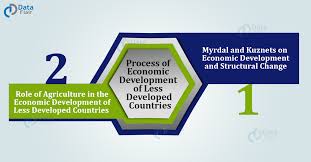 Agricultural sector growth will tend to increase farmers’ purchasing power which will help the country’s non-agricultural sector expand. It will provide a more productive market. It is well recognized that the majority of people in underdeveloped countries rely on agriculture and it is they who must be able to afford to consume the goods produced. 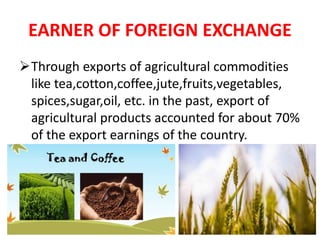 Source of Foreign Exchange for the Country

The majority of the world’s developing countries are exporters of primary products. Such goods contribute 60 to 70 percent of overall earnings from exports. Thus the ability to import capital goods and industrial development machinery is crucially dependent on the agricultural sector’s export earnings. If agricultural exports do not increase at a sufficiently high rate, these countries will be forced to incur a heavy balance of payments deficit resulting in a serious foreign-exchange problem. 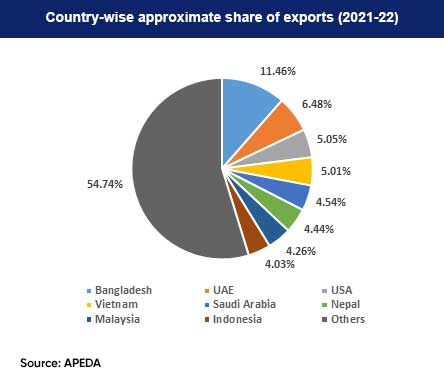 Primary goods, however, face falling prices on the international market, and there is a limited prospect of increasing export earnings through them. Despite this, major developing countries such as India (with industrial growth potential) are attempting to diversify their manufacturing structure and encourage the export of manufactured goods even though this involves the introduction of protection measures in the initial planning period.

The major source of livelihood 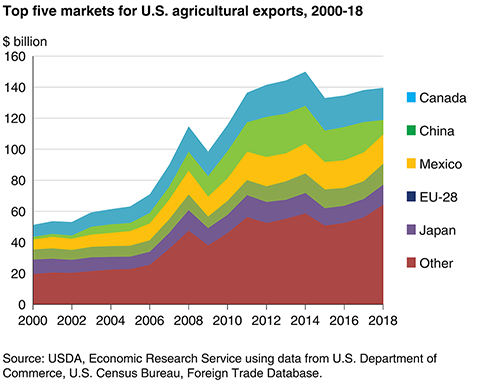 Agriculture in India plays an important role in the enhancement of international trade. The commodities which are exported from India are oil cakes, tea, vegetables, fruits, coffee, cotton, spices, tobacco, sugar, flowers vegetable oils, and raw wool. Agriculture contributes a noticeable part to Indian exports. With the invention of organic farming, exports have also increased in the last few decades. 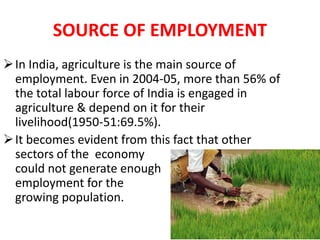 Indian agriculture gives employment and work to a vast majority of the people in the rural crowd. In rural and backward areas, almost 70% of the masses earn their livelihood from cultivation and allied agro-industries. Agriculture is also helpful in increasing employment opportunities in the manner that it is helpful in industrial growth and expansion which leads to an increase in employment. 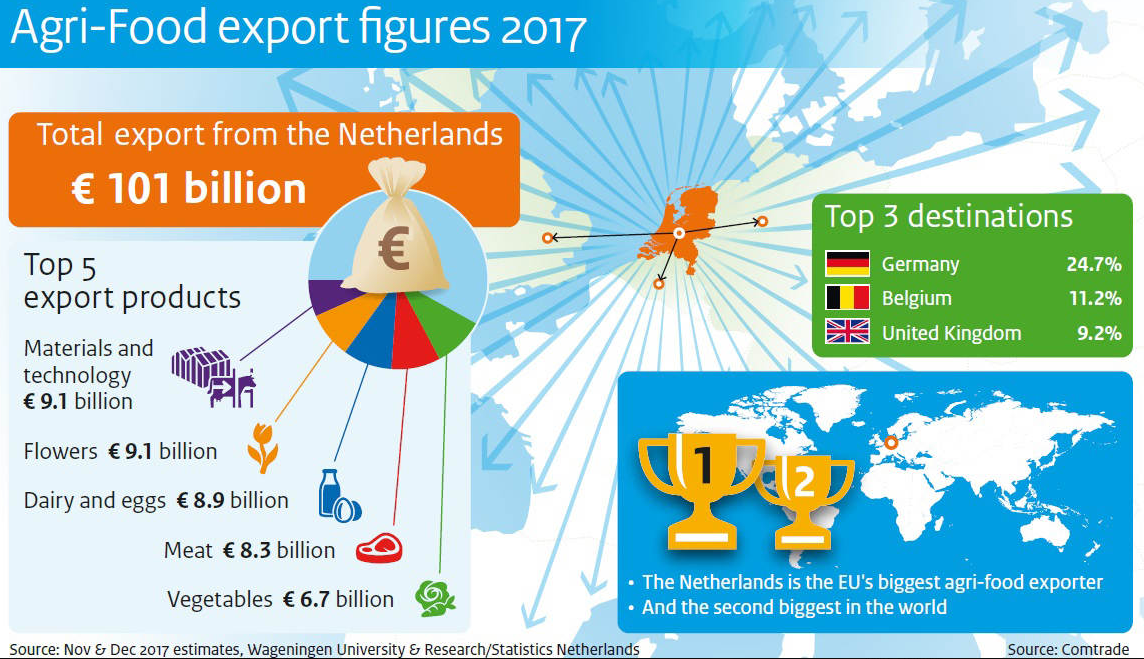 As we know that agriculture contributes almost 16% to the national income of the economy, there will be savings from the agriculturalist and it will lead to capital formation. The livestock viz. cattle, buffaloes, sheep, goats, horses, ponies, etc. also have their food from agriculture. 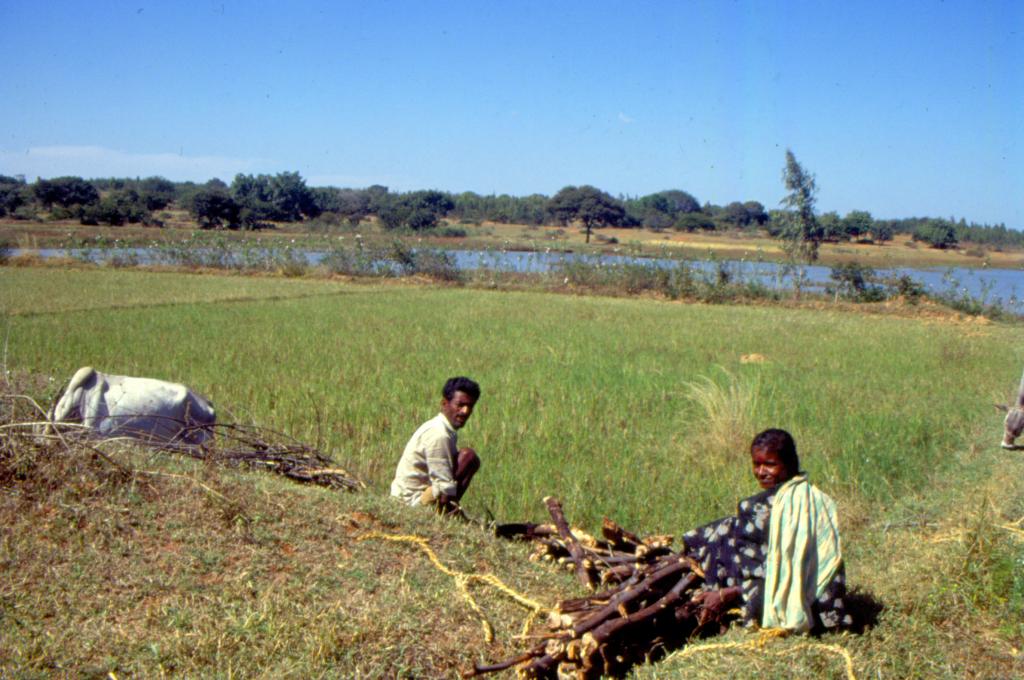 The techniques and methods of cultivation have been old and inefficient. It results in a high cost of production and low productivity. These methods have not undergone and changed for centuries. The investment in agriculture in the form of manures and fertilizers, improved seeds, irrigation, tools and implements, and other types of assets has been miserably low. 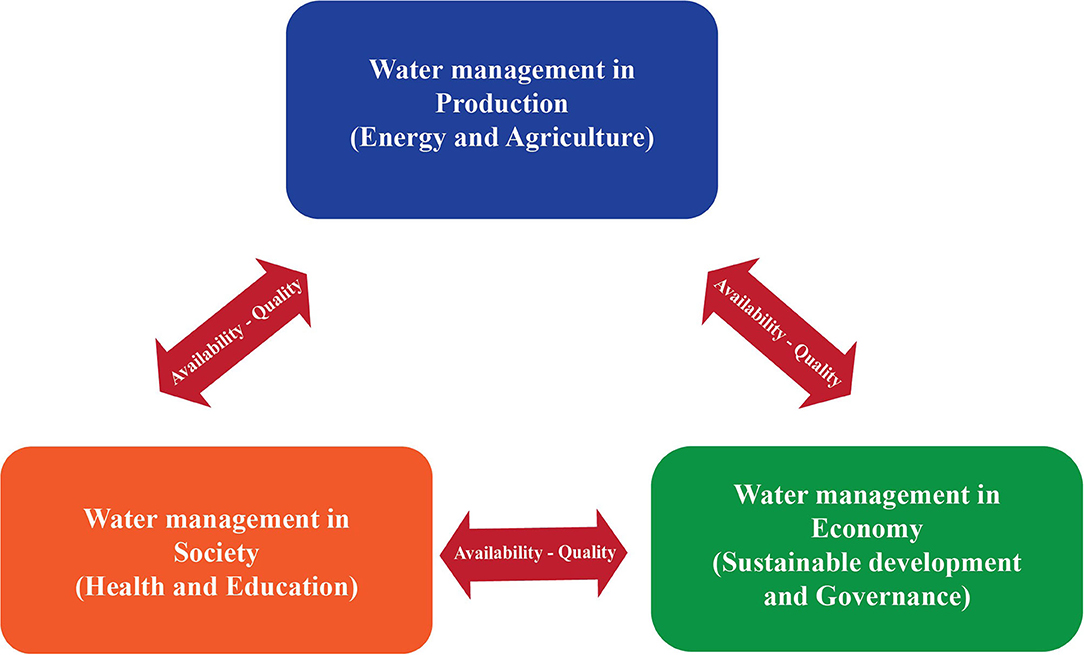 One of the main reasons for the weakness of Indian agriculture has been the lack of irrigation facilities in the country. The farmers have to depend upon rainfall and very few of them can avail the facilities of the irrigation systems. Sometimes drought and floods also spoil the whole cultivation and crops.

Indebtedness of the farmers

There is an old saying that the farmers in India are born in debt, live in debt, and bequeath debt. The reasons for their indebtedness are many such as hereditary debt, litigation, want of supplementary incomes, and wasteful social expenditure.

adoption of high-yielding varieties (HYV) is very rare in India. The important reasons for the slow growth of HYV are the non-availability of suitable seeds, the predominance of traditional seeds, a short supply of recommended seeds, and a defective distribution system.

Absence of Innovation in Agriculture

The absence of an alternative for escaping pre-monsoon showers to avoid the problem of pre-harvest sprouting of crops in flood periods is a major problem. There is a lack of improved crop management practices for shifting cultivation. The facilities of storage, processing, and marketing are particularly deficient for perishable commodities.

Most of the areas remain inaccessible during rainy seasons for the non-availability of all-weather roads. Roads are found to be highly damaged and there are no proper transport facilities to access the villagers.

Government Measures: Through the five-year plans, the government of India has played an active role in the development of agriculture. Proper objectives have been laid down in the various plans. According to these objectives, corresponding measures have been spelled out. All the activities are directed towards the achievement of these objectives.

From the first five-year plan, the government realized that for the development of agriculture, the government has to play an important role which would be a crucial one. Agriculture is the backbone of the economy and the poor farmers cannot uplift themselves.

That is why the measures needed for the upliftment of agriculture could be taken by the government. In recent years, the government’s actions have expanded to include programs for rural development and special area programs.

The objectives of different plans are varied from time to time. Somewhere the aim was to increase productivity and elsewhere to improve the quality of food grains. Land reforms have been the other significant objective. Another important objective was to uplift the weaker sections of society. For example, the small and marginal farmers, landless agricultural laborers, and many of those engaged in activities allied to agriculture such as animal husbandry and fisheries, etc.

To achieve these objectives, many measures have been taken by the government of India. For example, to increase production and productivity the supply of inputs, infrastructural facilities, an extension of irrigation, modern laboratory-based seeds, include banking, marketing, credit, transportation, communication, finance, education, and information dissemination, etc. 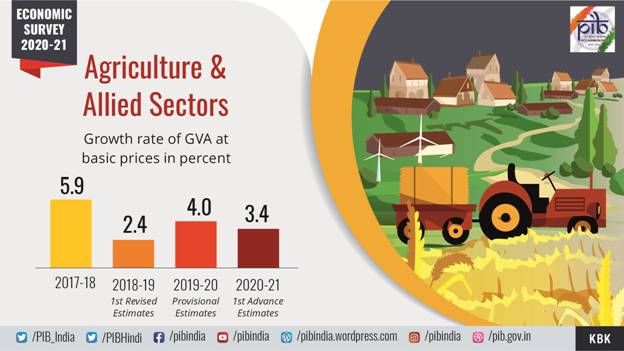 Large resources have been devoted to agricultural development. These have been on the rise from plan to plan. The funding for the development of agriculture has also been increased from time to time. For the control of droughts and floods, many funds have been given by the government. Special programs for the benefit of rural people have been introduced along with industrial development.

Agriculture is the Indian economy’s most important sector. India’s farm sector is the largest industry. Approximately 70 percent of people in India are either farmers as a vocation or as workers. The share of GDP is just 18 percent. But it employs around 50 percent of the workforce in the country. It provides food in India for about 135 crore people. India has become the world’s largest producer of pulses, rice, wheat spices, etc. For more information please visit Pritish Kumar Halder ‘s page . 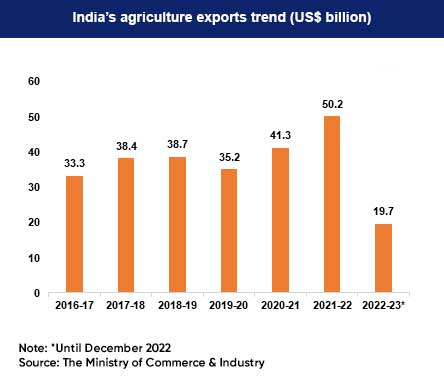 Approximately 12 percent of export earnings come from the agricultural sector. The Indian trade surplus of 14.6 billion dollars from agriculture was generated in 2018. These stats show how big and important part of the country’s functioning is the agriculture sector. With constant changes and developments happening, and policies being introduced, it is only going to go upward from here and will always remain an important factor in the economic development of the nation. 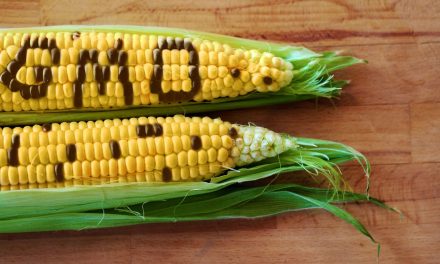 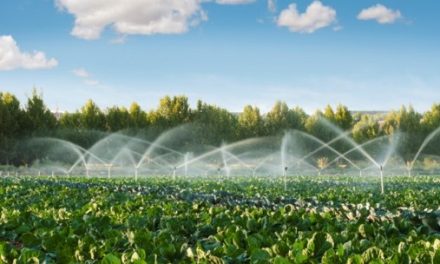 Cover crops : types and benefits to use in agriculture 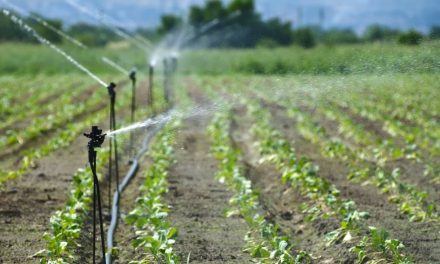